Barbara Pepper was born Marion Pepper in 1915 at the Astor Hotel in the heart of New York’s theatrical section. Her father, David M. Pepper, was the desk man at the hotel. In 1920, David accepted a management job at Albany’s Hampton Hotel, and moved to this city along with his wife Sally and his 5-year-old daughter, Barbara. The child was enrolled and became an honor roll student at School 2.

Pepper quit his Albany job in 1928 and moved back to New York City and the Astor Hotel. Barbara grew up surrounded by glamour girls, show people, and gangsters. In 1930, her parents tried to remove her from these bad influences by enrolling her at Fairfax Hall, Virginia, a junior college and preparatory school for girls.

On her first weekend home, instead of returning to school, Barbara went around the corner to where Lee Shubert was auditioning chorus girls. Shubert didn’t recognize the daughter of his old friend, Dave Pepper. He saw a cute kid who could dance, and he signed her. Mom and Dad Pepper were beside themselves, but Shubert convinced them to give the girl a chance.

At age 15, Barbara Pepper was in show business. She quickly became one of the White Way’s best known showgirls. Barbara starred in the Ziegfeld Follies of 1932 and in two of George White’s “Scandals,” where she was the youngest comedienne on Broadway.

The next year, Eddie Cantor dragged her to Hollywood for a bit part as a showgirl in “Roman Scandals.” She settled in California, briefly becoming a Goldwyn Girl, where she befriended a young Lucille Ball. Pepper never quite achieved stardom, but still became a movie mainstay, appearing in over 20 films, mostly in one-dimensional supporting roles or bit parts as a flashy dame. 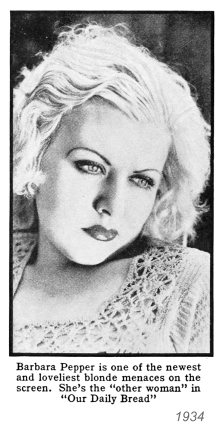 Pepper’s management executed a major push to enhance her career in 1937, with a spate of ads and publicity stunts. 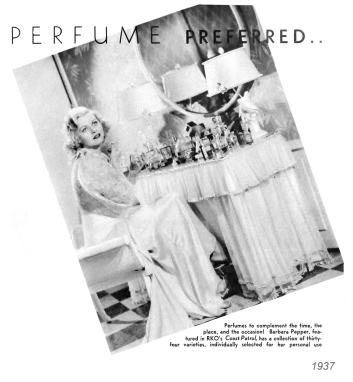 The latter included a trip to Albany, where she revisited her old school and met with her old teacher. Still, her roles remained consigned to small, often-uncredited parts.

That same year saw a marriage to Leon Janney, a 19-year-old actor; it lasted all of three weeks.

The actress made one more return to her childhood stomping grounds, in 1941, as a player in the Hollywood Sweater Girl Revue, at the Palace Theater.

After her disastrous first marriage, Pepper took up with Warner’s screen star Craig Reynolds. Reynolds would become Hollywood’s first Marine to be wounded in WWII. They married in 1943.

Reynolds died in a 1949 motorbike accident. Following this, Barbara spiraled down into depression and alcoholism.

In 1951, after Bea Benaderet proved unavailable, Barbara was seriously considered for the part of “Ethel Mertz” on her friend Lucille Ball’s classic sitcom I Love Lucy. However, with William Frawley – whose fondness for the bottle was legendary – already cast as “Fred Mertz,” executive producer Desi Arnaz felt he couldn’t take the chance of having two problem drinkers in pivotal roles on the same show.

Forced to find work as a laundress and waitress in between sparse acting parts, Pepper’s weight quickly ballooned and her voice turned gravelly. For the rest of the decade, Barbara would surface only occasionally in small comic roles on television and in films. She appeared a number of times on “I Love Lucy,” “Perry Mason,” “The Adventures of Ozzie and Harriet,” and “The Jack Benny Program,” and also had a brief appearance in 1963’s “It’s a Mad, Mad, Mad, Mad World.” 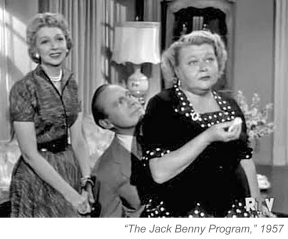 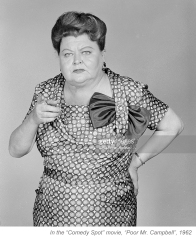 Barbara Pepper’s late-career break came when she debuted as Doris Ziffel in “Petticoat Junction” (1964). This led to a recurring part in 30 episodes of “Green Acres” (1965-1968), where Doris played the mother of Arnold, the TV-watching pig.

Deteriorating health eventually forced her to relinquish the part during the 1968-1969 season, with actress Fran Ryan taking over the part. Pepper’s final screen appearance was in 1969’s “Hook, Line & Sinker,” in which she played Jerry Lewis’s secretary.

One Response to “A Glamour Girl and Her Pig”