In the latter part of the 19th Century, homeless urchins were referred to as “street arabs.”

In 1885, a semi-charitable home was established at 51 Rensselaer Street for these homeless youngsters; it was named the “Boys’ Lodging House,” and accommodated up to 60 kids. 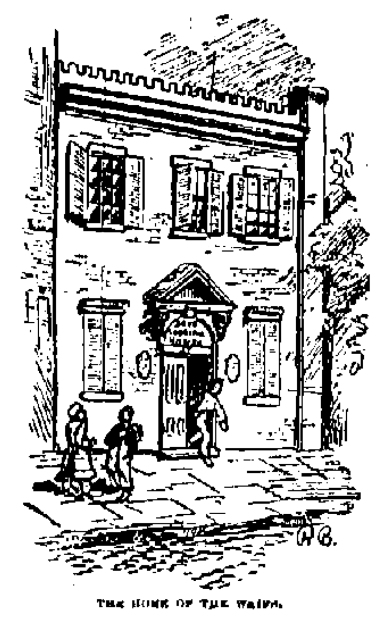 These streetwise little vagrants – many newsboys or bootblacks – formed their own little social communities, and tried to get by on what meager earnings they could scrape (or scam) together. They could often be found playing with the trolley turntable at the intersection of Pearl Street and Maiden Lane, making it a makeshift merry-go-round.

Once a year, the Leland Opera House would attract a mob by staging a free matinee for “orphans, newsboys, bootblacks and other street arabs.”

A new lodging house, maintained by the Albany Tract and Missionary Society, was opened at 712 Broadway in 1890, with facilities for 30.

The Boy’s Club was established around 1892 in rooms at 19-21 Pearl Street, and eased some of the load from the Boys’ Lodging House.

By the early years of the next century, the “street arabs” had mostly been hustled off to public schools or orphanages, and the Albany Boys’ Lodging House, now mainly a crash pad for grown men, had outlived its usefulness. It was closed in 1910.

Here’s an article from an 1886 Albany Evening Journal. I transcribed it to the best of my ability, but there might be a word or two which were just guesses due to the poor condition of the scan. I broke it into paragraphs, of which there were none. There are some world-class long run-on sentences herein! 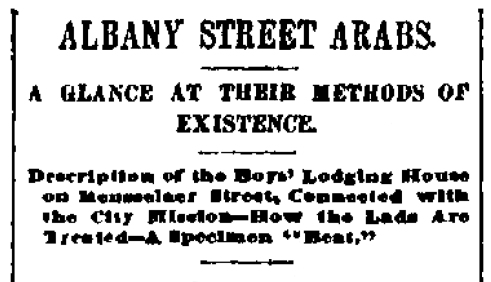 ALBANY STREET ARABS
A Glance At Their Methods Of Existence
Description of the Boys’ Lodging House on Rensselaer Street, Connected with the City Mission – How the Lads Are Treated – A Specimen “Beat”

A little newsboy stood in front of a big store on State street crying as though his heart would break. A bright silver dime, the result of the sale of two Journals had fallen through the iron grating in the sidewalk and lay on the cellar floor below. Fearing a repulse the little fellow did not dare to enter and ask permission to go through the building.

A group of spectators had gathered when a larger boy – a capitalist who owned a blacking-box – asked the trouble. The smaller urchin, between his sobs, pointed to the coin. Speaking a few encouraging words the “shiner” drew several pieces of string from his pocket and tied them together so as to make one long cord, and fruitlessly attempted to lasso the dime. A few seconds’ thought and a nail was tied on the end of the string. Another brief period of intense cogitation ensued, and the nail was smeared with axle-grease from the wheel of a truck standing by. Then the nail was lowered, the coin adhered to it, was drawn up and a broad grin took the place of the tears on the little fellow’s face. When the dime reached the sidewalk, string, nail, coin and bootblack vanished together.

Such instances of perfidy are rare among street arabs, however, and who can say but that in this case the newsboy, having had his loss made up to him by some sympathetic stranger, sought out his despoiler and “divvied” with him!

Manly, smart, quick-witted little fellows are these newsboys and bootblacks, and a truly happy life they lead in warm weather, but it is a hard pull for them to get through the winter when it is too cold to take one’s gloves off to get change to buy a paper, and when the biting winds render pneumonia probable if you stop on a corner long enough to get your shoes polished. A majority of them do pull through, but many of the would not were it not for the lodging house at 51 Rensselaer street, which is run under the auspices of the city mission and a committee of some of the wealthy and generous ladies of Albany.

Mr. And Mrs. H.N. Myers have charge of the house. They also run the coffee rooms in the mission building, where so many unfortunates receive the food necessary to keep soul and body together until the dawn of brighter days. The institution, strictly speaking, is not a charity. In order to inculcate industrious and self-reliant habits among its patrons everyone has to pay for his accommodation, but credit is advanced in every deserving case, and it is a fact worthy of notice that debts are generally paid, in the case of the younger debtors, boys of 14 years or less, always, seeming to show that human nature is not as bad as it is painted, that honesty is natural and that theft and dishonor are matters of education rather than instinct.

The lodging house is a plain brick structure, and at first sight would be taken for a police station or an engine-house were it not for the legend “Boys’ Lodging House” in bold black letters over the big front door. Inside on the ground floor is the reception room – a large, well-lighted, plainly furnished apartment, with a long center table, rather scantily covered with back numbers of the illustrated periodicals that have been contributed from time to time. In one corner is a book case containing good reading matter in book form. There is also a cabinet organ for the simple religious services which take place daily. Back of this room are the living apartments of the family in charge. The dormitory overhead is reached by a winding staircase in the front of the building. It looks like the interior of a hospital with its long rows of shining white cots. Mr. Myers sleeps here “to keep the roof on,” as he says. His bed differs from the others only in being contained in a wooden bedstead, but woe to the previous youngster who inadvertently ships a boot at its occupant or otherwise disturbs his slumbers, for though Mr. Myers carries an ounce or two of lead in his body as a memento of the Battle of Corinth and is somewhat disabled thereby, he has won the confidence and affection of his guests, who rise en masse to resent any insult to him, throwing the offender down stairs into the street, and if the weather be not too severe to be out of doors in night shirts, racing him several blocks.

Back of the dormitory on the same floor is the bath-room, with hot and cold water, the use of which, according to the regulations of the building, is compulsory for each inmate at least once a week. The building can comfortably accommodate from 50 to 60 lodgers. During the summer months there are not many calls upon its hospitality. Except in bad weather the boys prefer to sleep elsewhere, but in winter it is crowded, many of the guests sleeping on the floor with their clothes for a pillow.

No one is turned away as long as there is an inch of room anywhere, unless he is intoxicated. Mrs. Myers says that from the 1st of last October to the 1st of March she had sheltered 251 waifs and in every case, directly or indirectly, liquor was the cause of their destitution.

Cigarette smoking is the bane of the newsboys’ and bootblacks’ existence, many of them doing without necessary food in order to get money enough together to buy a bundle of the pernicious little rolls and who has not seen groups of the little fellows on the corners taking turns in smoking a cigarette that has come into their possession.

The house, however, is a charity, inasmuch as it receives presents of money, clothing, books, etc. and Mr. Myers is always glad to have any work sent in that his boys can do. The Rev. P.R. Day, president of the city mission, receives contributions. The house is open to all visitors and is an interesting place to visit. The Myerses are kindly people and one would think they would be often imposed upon. They are occasionally, as the following will show: Some time since a young gentleman about 30 years old came to their coffee rooms with an order from the you men’s Christian association while Mr. Myers was out. He ordered lamb chops, ham and eggs and dessert and then took a 10-cent cigar. The next day, when Mr. Myers was in, he came again and ordered pork chops to commence with. The waiter brought him a large plate of beefsteak. He became angry, but finally ate his meal, called for dessert, didn’t get it, and went off in a towering passion because he was made to relinquish a high-priced cigar that he took from a box on the cashier’s desk when he showed his order.

The coolness of the season grows apace, and soon the boys’ lodging house will have all the business it can attend to.