Giuseppi Nigro -age 24 – and wife immigrated to America in 1904. They hit the ground running. In 1905, the Nigro family opened a little grocery store at 114 Green Street. Six years later, it moved “uptown,” to a space on the city’s outskirts, at 652 Central Avenue. J. Nigro & Son watched their quiet neighborhood grow into a busy hive of commerce, and grew with it.

In 1933, Nigro bought the next door property (formerly home to a diner) and incorporated as the Albany Public Market (650-652 Central Avenue). (That building still stands, now Aaron’s Rentals.) 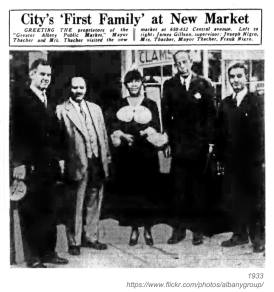 Nigro had grander visions for his successful little supermarket, and in 1947 he broke ground for an ambitious new Albany Public Market at 711 Central Avenue.

The gigantic new airplane-hangar-sized store opened (October 26, 1948) with a barrage of local excitement. The superlatives weren’t mere hyperbole – it really was the “largest food department store in the world.” Boasting an unheard-of 22,000 square feet of floor space, a warehouse that could hold 70 freight carloads of food, its own bakery, and a three-acre parking lot capable of holding 1,000 cars, the complex was an immediate sensation. (Then-VP Frank Nigro expanded on the hangar idea, claiming the building – twice the size of Albany Airport’s largest hangar – would house two B-29 bombers with jet fighter escort.) 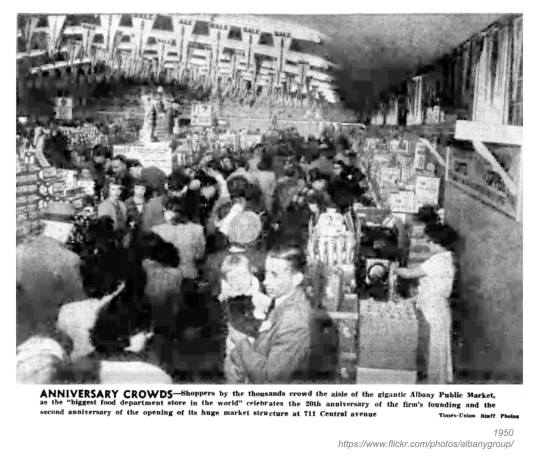 A decade later, Albany Public Market would become the cornerstone business at the new (Nigro-owned) Westgate Shopping Center, with a store twice the size of the previous location.

Nigro coined the word “Westgate,”after reading a newspaper article about how Central Avenue (the Albany Schenectady Turnpike) was gateway to the West. Westgate Plaza was on the leading edge of mall shopping; despite it being entirely within city limits, it was, as a 1957 article said, “on the outer fringes of Albany.” Once again, it properly claimed the title of largest food store in the United States. The 711 Central Avenue hangar became King’s Department Store (and later on, OTB Teletheater/Nick’s Sneaky Pete’s, before it was razed to make way for Shop Rite).

Albany Public Market expanded over the next two decades, becoming the first large supermarket chain in all of upstate New York. Constant advertising, smart publicity and clever promotions kept both Albany Public Market and Westgate Plaza highly visible to the shopping public. Every Albanian of a certain age remembers one stunt or another, be it Santa landing in a helicopter or a DJ broadcasting from atop the Westgate sign. Old Newspapers
Albany Public Market was purchased by Weis Markets of Sunbury, PA in 1967, retaining the Nigros as directors and managers.

Eventually, the Nigros began concentrating their energies into lucrative real estate and banking operations. Best I can tell, Albany Public Markets ceased to be sometime around 1984-5.

Clarifications and corrections to this history are welcome.