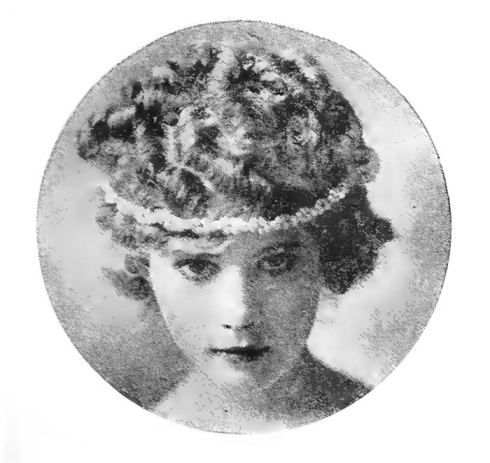 Dutch-born immigrant Stephina Herrewyn was just eighteen in 1920, when she entered her first Albany beauty contest.

Her employer just happened to be the Wendell Photo Studio, 35 North Pearl Street, who took her portrait shot.

The Mayflower Photoplay Corporation promoted itself via a “National Sales Girls’ Beauty Contest,” in conjunction with fifty newspapers nationwide. The grand prize was six weeks filming an R.A. Walsh motion picture and six weeks in the Ziegfeld Follies at $100 a week, for a total of $1200, a lot of money in those days. The Times Union also offered cash prizes to the top three local entrants, and Stephina was number one, winning fifty dollars.

The Kinogram Company sent a motion picture operator to Albany to film Ms. Herrewyn so the national judges could render a decision. They shot a hundred feet of film, both at her workplace and in Washington Park.

On September 20, 1920, this reel of film was shown at Proctor’s Grand Theatre, with Stephina in the audience (it was shown every night that week). As the account goes, “Miss Herrewyn, exceptionally natural, and of graceful carriage, screened remarkably well, and from all appearances, no one would have imagined that it was the young lady’s first effort in screen work. Miss Herrewyn’s picture is prefaced by a reproduction of the judges, with anxious faces, pouring over a mass of photos. They finally pick out three, and these are shown on the screen. Miss Herrewyn, proclaimed the most beautiful salesgirl in the Capitol district, is then shown in two poses made at the studio, and two taken as she was walking about Washington Park.”

Stephina Herrewyn did not win that contest. The winner was Edith May, a server in a Monroe, Wisconsin waffle shop.

From 1922-1929, the Fort Orange Post of the American Legion held an annual “Popularity Contest” for girls. Stephina won the first contest, and her victory made the front page of the New York Evening Telegram. Interviewed for the article, Miss Herrewyn made some demure noises about the possibility of a career on the stage.

She was not heard from again until 1925, when she entered the “Opportunity Contest” conducted by Screenland Magazine. Of the 5,000 entries vying for a shot at becoming a movie actress, Stephina made it to the top five (but didn’t win).

It’s possible the judge of the contest, notable director Tom Terriss, brought her to the Famous Players-Lasky Studio on Long Island for a screen test. Miss Herrewyn then dropped out of public sight. 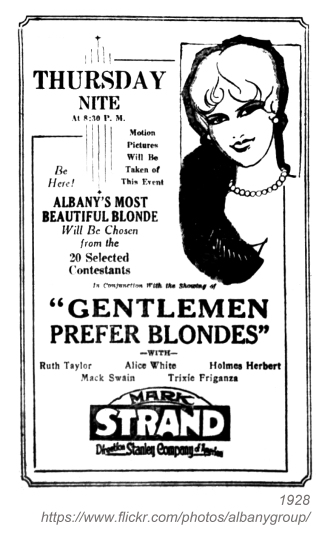 Not only was the contest finale itself filmed, but a Paramount screen test was slated for March 5, 1928, five days later. The film was a thousand-foot reel (and probably lost to the sands of time, but someone should really inquire with Paramount).

A Mark Strand ad later that same month touted “the screen debut of Albany’s most beautiful blonde, Miss Stephina Herrewyn.” Since she wasn’t in the cast of the feature film on the bill, “Sadie Thompson,” it’s likely they showed either the screen test or the contest footage mentioned above.

And that, far as I can tell, was the entire showbiz non-career of the “fairest daughter of the Capital City.” Miss Herrewyn went on to marry another Hollander, Robert F. DeRouville. They lived at 1 Bohl Place, and had two children, one of whom made the local papers in 1936 for a human-interest story about a found dog.

Thanks to Pat Reilly for her help in researching this article.