Another “lost” local broadcaster story. This may be stretching the “Albany” part a bit, but its signal was visible here and its programs listed in our newspapers.

WMGT (Mt. Greylock Television), North Adams/Pittsfield, rode the first wave of UHF allocations when the FCC removed its freeze on new licenses. Put together by Leon Podolsky, an engineer at Sprague Electric Company of North Adams, the station was assigned to channel 74. After several delays, it hit the airwaves early in 1954, broadcasting from 6-10 pm every night. It had a smattering of programs from ABC and the DuMont network, but mostly it was old movies, puppet shows, and kinescopes of several dull series. This ungodly-high-number channel was not well received on equipment of the day (you needed a set-top converter box and antenna), and later that year WMGT paid off a Utica applicant for its channel 19 allocation; for the first time, the broadcaster put in a respectable signal to the Capital District.

The station limped along with limited programming throughout 1955. At the time, its only competitors were WRGB (6) and WROW-TV (41); WTRI (35) having lost its CBS affiliation to WROW-TV, had left the air. 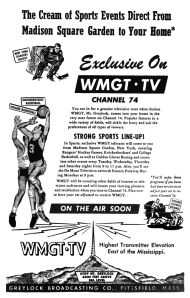 In February of 1956, a winter storm with hurricane-force winds destroyed WMGT’s antenna and tower, atop Mt. Greylock. Reconstruction would have to wait until the snows cleared in the spring. In the meantime, WTRI had come back on the air, snagging ABC, the last remaining network affiliation.

The FCC was about to grant WROW-TV (now WCDA) VHF channel 10, which would leave WTRI and WMGT in the UHF ghetto (UHF converter sales plummeted upon the announcement). After having sunk over $1,000,000 into the station, Podolsky threw in the towel, selling channel 19 to WCDA for $379,206, the sale approved almost a year to the date from its catastrophic accident. The station returned to the air as WCDC, relaying the programs of Channel 10; it was sold by Nextar Broadcasting in the 2017 FCC Spectrum Auction for $34.5 million dollars to make room for wireless networks, and left the air for good on November 19, 2017.

ADDITIONAL INFORMATION from the QRZ.com page of W1AWX:

“In 1954 Mount Greylock was the site of WMGT-TV74, once the most powerful television station (300,000 watts ERP) in North America. The studio was in Pittsfield, MA and owned by electrical inventor Leon Podolsky. They provided local news and programming with just one RCA-TK11 camera linked to Greylock by microwave. WMGT also carried DuMont (WABD-TV5), the New York Daily News’ independent WPIX-TV11, and ABC (WABC-TV7) programming picked up directly off the air from New York City 135 miles away with VHF yagi antennas atop Mt. Greylock.

“At it’s Feb. 5, 1954 sign-on WMGT-TV was the highest transmitter elevation east of the Mississippi until WMTW-TV8 began broadcasting from 6,289 foot Mt. Washington, NH on Sept. 25 the same year. The original WMGT-TV tower was destroyed after only two years in a February 1956 ice storm. There were too few TV viewers with UHF receivers and there was not enough cash left to rebuild. The station was sold to Lowell Thomas and became WCDC-TV19, a satellite station of WTEN-TV10 in Albany.

“These images are from the original 16mm film that was shown on that very first optimistic WMGT-TV74 broadcast day, Feb. 22, 1954.”